2006 is the 25th Anniversary of Saga’s introduction of Cremona Violins to Domestic and International Markets. Saga Musical Instruments was the first American Company to import musical instruments directly from Mainland China in the post-war era. Join me in 1981 in Shanghai for the sixth installment in this series as I visit my first factory in China. The basic design of the violin has remained remarkably unchanged for 300 years.

During that period, however, the market and the location of manufacturing facilities have seen major shifts. France was first to manufacture large quantities of student instruments and then Germany enjoyed nearly 100 years of dominance in a rapidly growing student market. Beginning in the 1960s that all changed as manufacturing facilities in Asia entered the fray. In the relatively brief period of 40 years we have seen production dominance shift from Germany to Japan to Korea and most recently to China. By 1981 I had already visited violin workshops in Europe, Japan and Korea. The factories in Japan and Korea were quite heavily mechanized and had introduced production shortcuts (pressed top and backs as one example) that lowered cost but negatively affected quality. In Shanghai the picture was quite different. Although the violin factory was jammed into what had formerly been an office building in the downtown area it was remarkably neat and orderly. 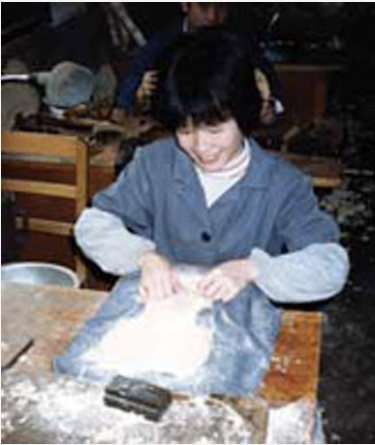 I was astounded by the amount of handwork that was being done on each instrument. Thirty years of economic isolation had eliminated the production influences of Japan and Korea. The production process was quite similar to that of a small workshop just on a larger scale. There were many areas of weakness: The finishing process was poor, many essential raw materials including ebony simply were not available, and international sizing standards were either unknown or not being followed. I was confident that I could change those things quickly. I was only half right! Change them we did but it sure didn’t happen at the pace that I expected. China was still locked in the chains of Socialism. The factory, like everything else in China, was government owned. The average wage, including that of the factory manager, was well below $50 per month. Improvement always means work and there was simply no incentive at all to change anything! I soon discovered that Saga’s main job in China would be to find people who would work with us even though there was no prospect of financial gain. In our next installment we’ll meet some of those “misguided” people.