Frampton Comes Alive! is many, many things. It’s Peter Frampton’s breakout album, of course, the one that established him as a superstar. It’s also among the best-selling live albums of all time, going 8 times platinum in the U.S.

Frampton Comes Alive! is many, many things. It’s Peter Frampton’s breakout album, of course, the one that established him as a superstar. It’s also among the best-selling live albums of all time, going 8 times platinum in the U.S., selling more than 17 million albums worldwide, and producing a handful of hit singles that have never gone out of rotation on rock radio. It’s a pop-cultural phenomenon, a coming-of-age totem for generations of fans who grew up in the ‘70s and ‘80s. And, of course, it is an extended display of mind-blowing guitar prowess, revealing one of the finest instrumentalists of the rock & roll era drawing voraciously from a dizzying array of musical styles, techniques, and technologies.

Perhaps even more than his guitarwork, what impresses most about this double album, recorded at venues in California and New York, is how naturally and enthusiastically Frampton engages with his audience. He jokes and joshes with his fans, encouraging them to sing along, and in turn they cheer him on exuberantly, pushing him to play more intense solos and more emphatic riffs. Even forty years later, it’s impossible to tell who’s having more fun: the people onstage or the people in the crowd. His fretboard talents make him something like a rock god, but his fervor onstage makes him sound like another excited fan. He balances those two roles—the hero and the everyman—so effortlessly that it’s hard not to get caught up in that wonderful synergy as they feed off his energy and he off theirs. Few live albums in any genre sound like such a collaborative effort between an artist and his audience, and perhaps that’s where the Comes Alive part of the title originates.

That close relationship has been at the heart of Frampton’s remarkable career, which now extends more than half a century. He is always playing to that excitable audience, always letting them challenge and boost him. That’s true enough when he was just a teenager in the late 1960s, strumming and riffing in a series of teenage garage bands like the Little Ravens, the Trubeats, and the Preachers. After two years with the Herd—during which he played on their hits “From the Underworld” and “I Don’t Want Our Loving to Die”—he formed Humble Pie with Steve Marriott of Small Faces.

Even at 18 years old, he was a star player on a scene lousy with excellent guitar players, meshing blues and jazz and rockabilly and skiffle and any other style that crossed his band into a new, loud, exciting rock sound. That made him a popular sideman well into the ‘70s, playing sessions for some of his heroes (Jerry Lee Lewis, George Harrison) and some cult artists as well (Jobriath). “The people I admire,” he says, “I find that they’re humble people. The reason they’re so good is because they’re so humble. They think they need to get better. Which we all do.”

He would carry that philosophy of constant self-improvement onto his celebrated solos albums, including his 1972 debut Wind of Change and 1973’s Frampton’s Camel. Each album introduces new sounds, teases new ideas, shows off new tricks. Even when Comes Alive made him one of the biggest stars on the planet, he continued to view rock & roll as a vehicle for musical exploration and emotional connection on 1977’s I’m in You and 1981’s underrated Breaking All the Rules.

Following a hiatus in the 1990s, Frampton has remained active and ambitious in his playing: always learning, always challenging himself. He has made new fans with each new generation, thanks to his appearances on The Simpsons and Family Guy. And on 2006’s Fingerprints, he teamed up with an all-star backing band—including members of the Stones, Pearl Jam, and Soundgarden, along with Frampton’s own guitar hero, Hank Marvin and the Shadows—for an inventive set of originals and covers that won a Grammy for Best Instrumental Pop Album. “I came out like a deer in headlights, because I had no idea that was coming. It was a complete shock. I’d written myself off. And then Larry Carlton comes up to me afterwards and gives me the biggest hug. I have to say, that was possibly even better than getting the Grammy.”

In many ways Frampton remains a fan at heart, awed by the talents and techniques of his peers. That’s what motivated him in 2013 to launch the Guitar Circus, a touring revue featuring instrumentalists from various genres and generations. Each night featured a different lineup, from Robert Cray to Steve Cropper to Steve Lukather to the late, great B.B. King. “Every night he would open for us! Let me say that again: B.B. King opened for us. It was absolutely incredible, and at the end of his set every night, he would call for me. I’d go out there and sit down next to him and we’d play ‘The Thrill Is Gone’ together.”

That experience informed his latest album, All Blues, which includes a performance of King’s classic that is indeed thrilling. The album, which debuted at the top of the Billboard blues chart in June, is Frampton’s first with his ace touring band. “I’ve always loved the blues. It’s been a part of me since I started playing guitar. We wanted to pay homage, so we went back to the original versions of these songs. And we decided to record live in the studio, so we’re talking to each other musically, which is so important. When you’re playing blues, it should be as live as possible, at least in my mind, because that’s what the blues is all about. You need to be in the moment, and it needs to be different every time.”

The blues is about connection and, of course, commiseration; it’s about the expression of a hurt that cannot be easily soothed. Yet, it is also about celebration: In declaring their pain, blues artists are also proclaiming that they are alive, that they exist in the world. That’s especially crucial to Frampton, who was recently diagnosed with inclusion body myositis (IBM), an inflammatory disease that weakens and atrophies the muscles in the arms, hands, and legs. “I’ll always be able to sing, but at the moment I don’t know how much longer I’ll be able to play guitar. Fortunately, I have a bunch of friends who can play guitar and help me out. Some of them are pretty good, too!”

Frampton’s sense of humor remains intact, as does his determination to combat this and other diseases. “My main thing outside music is the fund-raising I’m doing for myositis research at Johns Hopkins. I hope to become the face of IBM and be able to raise awareness for it and all auto immune diseases.”
” 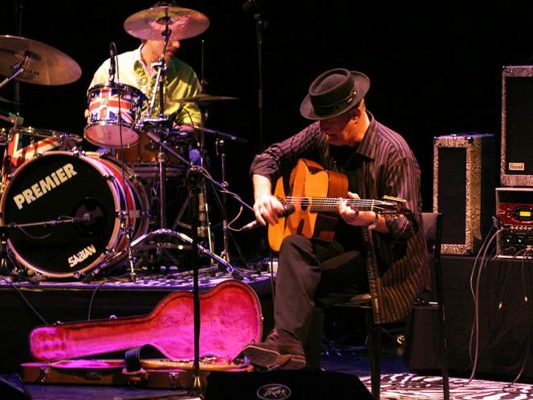