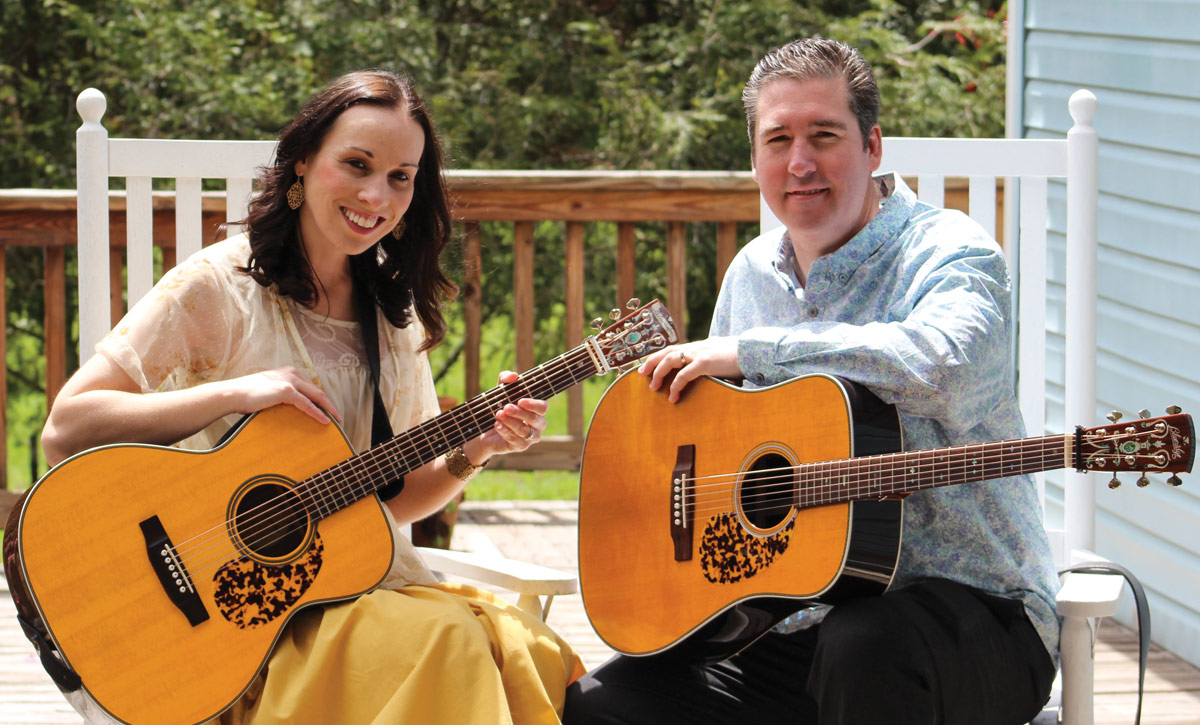 The North Carolina duo has spent a decade amassing a fan base, reaping awards, becoming Grand Ole Opry favorites and issuing a string of well-received albums.

But the release of Inner Journey is a diploma of excellence for the team. The album garnered the duo their highest chart debut to date, entering the Billboard Bluegrass Album chart at #2.

“This feels like a new beginning,” says Darin. “We’re hoping that our music will get to a lot more people with this record.”

The album is the couple’s debut for the acoustic-music powerhouse Rounder Records. Co-produced by Darin, this recording is the most fully realized collection in their already impressive catalog. Years of singing together have polished their harmony blend to a gorgeous glow.

The team’s exquisite revival of The Louvin Brothers’ “Every Time You Leave” has already become a successful single and video. This aching lament features a third harmony part by The Statler Brothers’ Jimmy Fortune.

The trials and triumphs of youth are the stuff of “Teach Your Children.” This Crosby, Stills and Nash pop oldie is given a country makeover by the Aldridges. Darin takes a lead-vocal interlude while Brooke and fiddler Carley Arrowood answer him in harmony.

You will find few more eloquent evocations of struggle than in their performance of Nanci Griffith’s “Trouble in the Fields.” Brooke sings the fire out of this brilliant, yearning masterpiece, breaking hearts at every turn.

More than anything else in the performances of Darin and Brooke Aldridge, you will find love. This is the source of the great power in their music.

The duo is lilting and joyous in “I Found Love,” written by Randy Scruggs, Vince Gill and Earl Scruggs. This upbeat celebration showcases Brooke’s sparkling mountain alto at its most enchanting, and the team’s vocal falsetto leaps are another audio delight.

The soaring “Emmylou” is an invitation to romance. This sweetly earnest plea comes from the repertoire of the Swedish duo First Aid Kit. Darin and Brooke take it on a jaunt through fields of bluegrass, essaying the tricky melodic turns of the minor-key gem with ease. The tuneful “This Flower” comes from Australian country star Kasey Chambers. It expresses thanks for a love that is cherished and suits the tender melodic Aldridge approach perfectly.

“Sweet Companion” might be the most apt description of the relationship between these two. “Hand in hand together/There’s nothing we can’t weather” captures the hope and optimism that are at the heart of Darin and Brooke’s music. Paced by Darin’s mandolin, they apply a skipping, bopping mood to the John Randall/Jessi Alexander/Sally Barris composition.

There is no better demonstration of this couple’s awesome duet ability than “When You Love Someone.” This dynamic ballad of love’s power is a songwriting collaboration between Canadian rock star Bryan Adams and Nashville’s Gretchen Peters. Darin and Brooke channel The Everly Brothers in their close-harmony treatment of the song.

Peters also provides this album’s saga of love’s healing warmth, “At the End of a Long, Hard Day.” The couple’s supremely evocative voices underscore the balm and calm in its message.

A mother’s unconditional love infuses “Someone’s Everything.” Brooke wrote it as a meditation about preserving your home in your heart. Her mother’s inspiring words, “Always remember, you’re someone’s everything,” echo in the singer’s ears along life’s journey. The album closes with the duo’s stunning rendition of “Your Lone Journey.” The singers confront the ultimate anguish of death with simple dignity as they sing Doc Watson’s beloved song of farewell. Instrumental contributions from Darin, Aubrey Haynie, Rob Ickes, Ron Block, Tommy White, Zeb Snyder and Mark Fain, plus Aldridge band members Arrowood, Matt Menefee and Billy Gee created a collection that marks a new pinnacle in the already esteemed career of Darin and Brooke Aldridge.

Their families both hail from Avery County, NC, which is deep in the heart of the Blue Ridge Mountains. Darin grew up in the Piedmont town of Cherryville.

“I’ve known that I was going to do music for a long time,” he reports. “My brother had a rock band, and The Beach Boys really caught my ear with their singing. I can remember going down to our basement as a child, just looking at instruments and sound equipment.

“There were always musicians around. My grandpa sang, and he was on the radio a good bit. My uncle was in a gospel group that sang professionally, The Melody Trio.

“But Vince Gill was probably my biggest influence. I’ve looked up to him ever since I picked up a guitar. When my first band got established, I was probably just 16.”

Darin Aldridge left the Tarheel State to tour with the star bluegrass band The Country Gentlemen in 1999-2005. But he found his life’s companion back at home. He met Brooke Justice in 2005. By then, she’d been crowned a champion in more than 30 vocal contests.
“I learned singing from my mom and her side of the family,” says Brooke. “On weekends, they’d sit around and sing a cappella. When I was a kid, both Mom and Dad recognized that I caught onto lyrics really quickly.

“I grew up singing a lot in church. Gospel and country music were instilled in me at a very young age. From elementary school all the way up through the eighth grade I was in talent competitions,” singing the songs of Tanya Tucker, Pam Tillis, Carlene Carter and, especially, Emmylou Harris, Brooke’s biggest influence.
When she was 15, a friend gave her an album by Rhonda Vincent, and Brooke became a bluegrass convert.

“The church she went to, my third cousin was the preacher,” recalls Darin. “One of my favorite aunts went to church there, and she was real close to my mom. They talked a lot about Brooke and her singing voice.

“I was with The Country Gentlemen at the time. I travelled a bunch. But people kept telling me about her, saying, ‘She’d be perfect for you.’ And she heard the same about me.”

After corresponding for about a year, they began harmonizing at her church, singing “Precious Jesus” and “Drifting Too Far From the Shore.” They teamed up professionally and married in 2008.

Six years her husband’s junior, Brooke was a novice at the time: “When we first started working together, Darin said, ‘How serious are you about this? Because it is a lot of hard work.’ “That’s the side of it that I didn’t realize. I didn’t have any clue about what there was to having a music career.”

Following a gospel debut CD, Darin and Brooke Aldridge released five acclaimed studio albums, as well as a concert CD. Those records have brought the couple accolades from the International Bluegrass Music Association, Darin as a Mentor honoree and Brooke as the IBMA’s Female Vocalist of the Year in 2017-18. Their extraordinary voices have led to over 22 appearances to perform on the Grand Ole Opry over the past two years.

“We want our music to lift people up,” Brooke offers. “It was an early goal of ours to put a positive message out there,” adds Darin. “And we decided a long, long time ago, that we were going to be US, no matter what.”

What ultimately makes their partnership work is that they have absolute and total respect for one another. This is evident in everything that they do.

“We’re a good fit for each other,” observes Darin Aldridge. “Looking back, I think it was just meant to be,” says Brooke Aldridge.