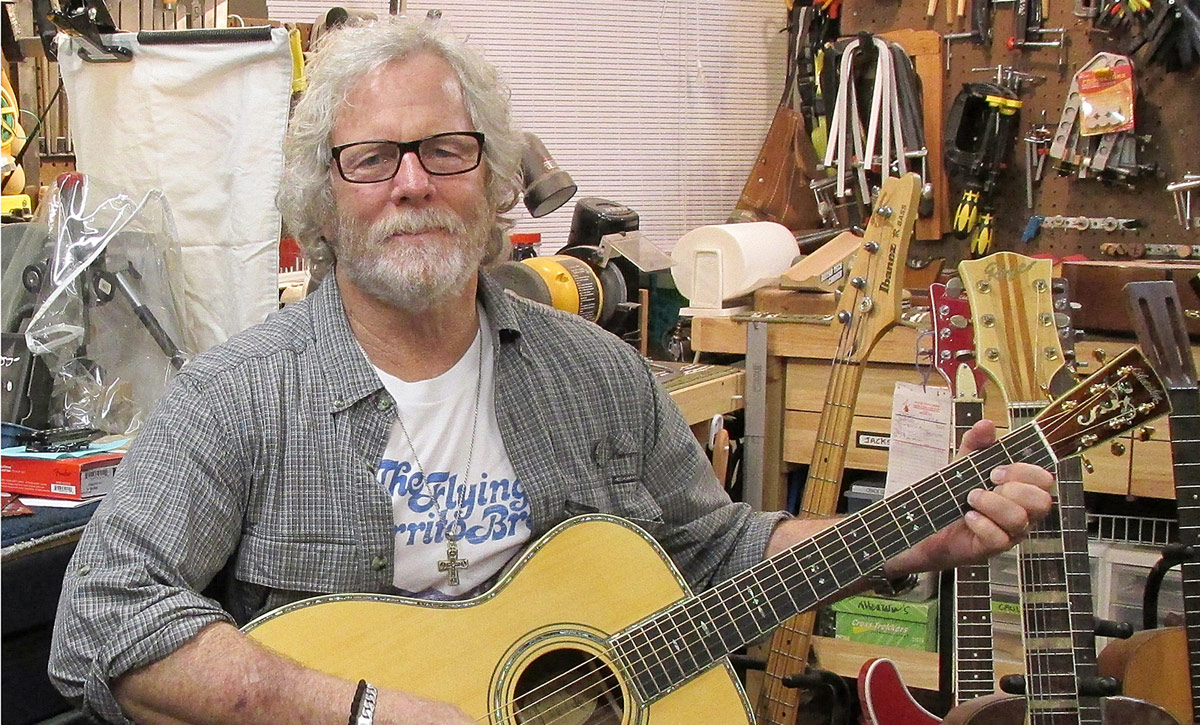 Chris Hillman is the kind of free only earned by having nothing left to prove.

“It was a passion,” Hillman says, reflecting on his early years with a guitar, mandolin, and bass. “I had this passion to embrace the music and learn it, never really thinking, ‘I’m going to be a huge star.’ I didn’t think that way at all.”

At first, it’s tempting to dismiss the idea that the co-founder of Rock and Roll Hall of Famers the Byrds, as well as the Flying Burrito Brothers, Manassas, and Desert Rose Band, never longed for bright lights. But his confession actually hints at a deeper truth: Hillman didn’t dream of his name on a marquee because ultimately, he was meant for something far greater. Chris Hillman is more than a rock star. He is one of the architects of American music.

Hillman’s new album Bidin’ My Time puts that pedigree on ferocious display. Produced by Tom Petty and executive produced by Herb Pedersen, the project captures a rarity: an icon who has never sounded better, making music with old friends for the sheer love of it. “I did everything I felt was right in the moment,” Hillman says of the recording process, before adding with characteristic sincerity, “I did my very best. That’s all any of us can do.”

Bidin’ My Time is an understated but undeniable masterpiece, relevant, layered, and bright. Folk, rock and roll, bluegrass, and the unmistakable country-rock Hillman helped pioneer come together seamlessly on songs written by Hillman and his peers in the 60s or in the last few years. Collaborators and admirers from Hillman’s storied career appear throughout the record, some as the album’s backing band, others in winking cameos. In addition to Petty, Bidin’ My Time features Hillman’s Byrds bandmates David Crosby and Roger McGuinn; the Heartbreakers’ Benmont Tench and Steve Ferrone; Desert Rose Band’s John Jorgenson and Pedersen; giants Jay Dee Maness and Mark Fain; the Shelters’ Josh Jové; and the Punch Brothers’ Gabe Witcher.

Petty’s debt to the Byrds is well documented, most of all by Petty himself – he penned the Byrds’ entry in Rolling Stones’ “100 Greatest Artists,” writing that the band is “immortal because they flew so high. For me, they’re still way, way up there.” When he asked Pedersen to join him on a recent tour to sing background vocals, Pedersen called Hillman, his close friend for more than 50 years, from the road to check in. “I knew Tom, but I didn’t know him well,” says Hillman. “I didn’t think I’d make another record. I was done.”

Petty and Pedersen had other plans. “Somehow the idea popped up between Tom and Herb: ‘Why don’t we produce Chris?’” Hillman says. “It just kind of fell in my lap.”

Hillman recalls the conversation he finally had with Petty about producing the project in November of 2016. “I said, ‘Do you really want to do this?’ And he said, ‘Well, do you want me?’ I said, ‘Well, yeah, I’d love to have you. But do you really want to commit to something like this?’ He said, ‘Well, do you want me to?’ Just back and forth.” Hillman laughs, then adds, “I said, ‘Man, you haven’t even heard any of these songs I have laying around.’ He said, ‘Aw, I know you’ll have some good stuff.’ Whatever that means.”

The funny anecdote reveals a big piece of who Hillman is – the only one in the room who doesn’t think he’s a legend. “I can look back on my career and say, ‘Gee, I wish this had happened,’ or ‘I wish I’d had more confidence,’ – I was such a shy guy in all those groups I was in,” he says. “I could have been a bigger ‘whatever.’” He pauses. “But does it really matter?”

Hillman grew up in California in the 50s. After his sister – “the bohemian of the family” – came home from studying art at the University of Mexico and the University of Colorado with a stack of Pete Seeger, Woody Guthrie, Lead Belly, and other records under her arm, 15-year-old Hillman became enamored with folk music. Then he heard old-time music and bluegrass, and his world shook. Head down, ears open, fingers suddenly itching inexplicably for a mandolin, a Southern California kid’s innocent obsession with Appalachian familial harmonies and strings would end up changing the course of music.

Almost 60 years later, Bidin’ My Time brims with that storytelling and virtuosity Hillman first loved, then perfected. The album kicks off with a new recording of Pete Seeger’s and Welsh poet Idris Davies’ “The Bells of Rhymney,” which the Byrds recorded for their debut, Mr. Tambourine Man. It’s always been Hillman’s favorite song the band ever recorded. Crosby and Pedersen contribute otherworldly harmonies to the tune, which swells from stripped-down folk into a layered rock-and-roll cry. “I decided to cut it again because I wanted to sing with David and Herb, two great tenors,” Hillman says. “David just loves Herb’s singing, and at 75-years-old, David is still a powerful singer – one of the best I’ve ever worked with or been around.”

Hillman is right to praise his friends, but his own voice is jaw-dropping. His vocals often sound downright dewy, like they belong to a fresh-faced kid who has been listening nonstop to his grandparents’ vinyl.

Another Byrds nod, “Here She Comes Again” was co-written by Hillman and McGuinn, and until now, had only been recorded on a live album in Australia. Hillman plays bass on the track – the instrument he originally played with the Byrds but hadn’t picked up in more than 30 years. The song’s lovesick narrator anticipates heartache with a knowing shrug, layered over crunchy electric guitars and B3 organ. “She Don’t Care About Time” was written by Byrds cofounder Gene Clark, who died in 1991. Hillman had always felt the song, which was the original b-side to “Turn! Turn! Turn!,” never quite got the attention it deserves. “Gene was such a great songwriter,” he says.

Hillman also indulged in an exercise every songwriter craves: he reworked “Old John Robertson,” first featured on The Notorious Byrd Brothers in 1968, to write “New Old John Robertson.” An ambling story song about a kind old man who lived in Hillman’s tiny hometown, the tune revels in Hillman’s bluegrass roots. Covers of the Everly Brothers’ “Walk Right Back” and Petty’s “Wildflowers” feel both new and needed, while Hillman’s tender vocals and chirping mandolin on “When I Get a Little Money,” written by family friend Nathan Barrows, soar.

Hillman’s originals confirm what a fierce songwriter he remains. Front-porch jam session “Such is the World We Live In” wonders what Hillman’s great-grandfather would say about current events. The song epitomizes Hillman’s distinct ability to bemoan ills without abandoning hope. Album standout “Restless,” another self-penned original, saunters as Hillman delivers a muscly vocal performance. Honest but loving, “Given All That I Can See,” a favorite of Hillman’s he calls the record’s “sort-of gospel song,” is a timely call for mercy and grace in an era beleaguered by hate and fear.

And just like that, Hillman – the attention-wary introvert and self-proclaimed “man of leisure” – emerges as a voice the world didn’t just miss, but needs. “There’s nothing I want,” he says with a smile. “I’ve had a great life. And it’s not over – we’re not done.”