Saga has had an office in Shanghai since the very early days of the reestablishment of trade with China. That office opened in the mid-1980s and it has been an invaluable asset to our growth as a company since then. When the office opened there was no such thing as a private automobile in China. The few cars on the road were owned by the government and a good percentage of those bore the distinctive red Chinese character in the initial position identifying the vehicle as being the property of the People’s Liberation Army!

It was sometime in the 1990s, I guess, that the front page of the China Daily carried a photo of a portly pig farmer standing beside his new car—the first privately owned automobile in China! Consider that two decades later, China is the world’s largest automobile market.

Our office in China has not kept pace with the country. The office staff members have their own cars but we still do not have a company car that might allow us to participate in May Day parades and other similar festivities. Earlier in the month Lloyd Stark and I test drove a couple of options—we still have not pulled the trigger (so to speak) but we are definitely narrowing down the choices! 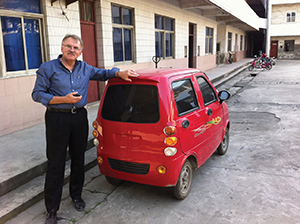 Lloyd Stark: Four on the floor and a 6-pack under the seat!