2006 will be the 25th Anniversary of Saga’s introduction of Cremona Violins to Domestic and International Markets. Saga Musical Instruments was the first American Company to import directly from Mainland China in the post-war era. Join me in 1981 Shanghai for the third installment of this series. I had just checked into the Jin Jiang Hotel the night before…

It had been a long trip to Shanghai and I slept the tortured sleep of the jet-lagged. I awoke vaguely remembering being in the annex of the Jin Jiang Hotel. It was daylight but the windows were cloudy with dust that most certainly had started to accumulate before the “liberation” of China some 30 years before! An orange glow was cast about the room. A groggy trip to the bathroom brought a rush of national pride—the fixtures were American Standard, early 20th century vintage! The ceilings were high and the rod for the shower curtain was at least eight feet above the bath tub. The Central Planning System in the Peoples Republic of China was no longer making shower curtains in such a height but the hotel staff was not to be deterred … long sections of yellow nylon strapping tape had been woven through the grommets of the curtain to the rod to compensate for short curtain…the result was shocking! I climbed in to the shower and carefully adjusted the water temperature with one hand beneath the bath spigot. 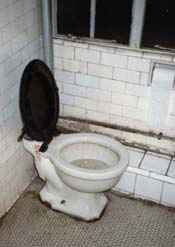 Previous encounters with live steam out of shower heads in ancient Asian hostels had made a cautious man of me! Finally the water was just right and I confidently swung the lever into the SHOWER setting. The shower engaged but a splashing sound told me that something was horribly wrong. I looked up and saw a hole in the pipe between the wall and the shower head! A jet of water was shooting over the shower curtain onto the opposite wall. Reflexes kicked in and quick as a cat I grabbed the pipe and stopped the leak…but there was a second leak … smaller but more diabolical….dart of water from the second hole nailed me right between the eyes! I was awake now and ready to fight! I grabbed the lever to disengage the shower and twisted it sharply. Hiding in the maze of pipes on the wall was a flexible shaft with a hand-held shower wand at its end. A blast of water from the wand told me that I had the lever in the wrong position but it was too late! The flexible shaft was now flailing about in the tub like an enraged snake! Jumping out of the shower I realized that I had been defeated but somehow managed to pull myself together and shut off the water… It was 7:30 AM in Shanghai and I was exhausted!!!