Asian economies continue to develop at a frantic pace and so has traffic congestion. Driving in foreign countries can be a rare treat but be prepared for challenges. Of course Japan and the British influenced areas of Asia- Hong Kong, Malaysia and Singapore hit you hard by placing you squarely in what we normally think of as the on-coming lane. It can be a terrifying experience especially in Japan where narrow country roads through mountain towns were built long before automobiles came on the scene. I still have a recurring nightmare of coming around a sharp curve and suddenly facing off with a twenty foot wide Fuso Semi that is occupying 2/3 of the road – and on the “wrong” side! But for sheer thrills it’s tough to beat the Philippines! Here in California, you only honk your horn after screams, whistles and extended fingers have provided no results! Hit the horn and grab your tire iron! My first driving experience in the Philippines was completely unnerving. 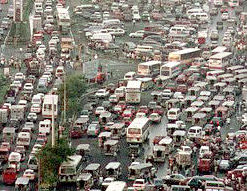 As I pulled out into Manila traffic, I was greeted with a crescendo of blaring horns. Within minutes I was a blithering idiot, cursing, honking and waving my arms around. I pulled over to compose myself and soon realized that everyone was STILL honking! In fact, the honking was really kind of a radar (or more precisely sonar) system to let other drivers know where you are. This bit of information is very important because there are no lanes. Well… there are sometimes lanes drawn on the pavement, but it’s just that no one pays any attention to them. Each driver has his own, unique rhythm pattern fo honking and soon I developed mine – an irritating (to my wife anyway) series of rapid, staccato beats. Without lanes the highway becomes like piloting a boat on a river and amazingly I soon discovered that the rules of sailboat racing apply here.

In sailboat racing there is the “Over-Lap Rule,” which states that if you are ahead of another boat (even by a millimeter) you can abruptly steer across the path of the boat that you have overlapped. Applying this rule in rush hour traffic requires cat-like reflexes and an extremely positive attitude. But things really get exciting out of the city traffic on the Macarthur Highway heading north to the rice fields of Central Luzon. This two-lane national highway, originally constructed by American engineers in the early part of the Twentieth Century, connects Manila to the northern provinces. As you speed northward you must expect anything – chickens, goats, water buffaloes, and people squatting on the edge of the pavement. The traffic itself is a combination of diesel belching busses, speeding cars, horse-drawn carts and slow moving tractors.

Unlimited access means that from every driveway and side road new exotic obstacles can suddenly appear. Soon you feel like you are in an arcade playing the most exciting game that you’ve ever seen. My closest brush with disaster took place a few years ago on that same highway. In the back seat were two Japanese Samurai Swords that I picked up at a public market up in the mountains. It was dark, no traffic and I was flying down the road. I crossed the border of the provinces of Pangasinan and Tarlac, familiar territory for me. I lived near there for three years of Peace Corps service. There was a corridor of palm trees and a sweeping curve ahead. Instinctively I slowed down and none too soon! Suddenly the road was littered with what appeared to bowling balls. As I braked and began to negotiate the obstacle course a large truck appeared, parked blissfully in the middle of the road. I’m sure my hand was shaking as I beat out my signature horn flam, waved at the driver, passed him by and headed south.