Next year will be the 25th Anniversary of Saga’s introduction of Cremona Violins to the Domestic and International Markets. Twenty-five years ago we were traveling the Pacific Road but there was no Retail Music News to record the things that were going on. We were the first company in the United States to import musical instruments directly from Mainland China in the post-war era so I thought that you might like to know how it happened. It was 1981 and Saga was in the process of opening an office in Nagoya Japan in cooperation with our leading supplier.
We decided to exhibit at the Frankfurt Music Fair under the banner of Saga Japan in an effort to spur direct shipments from Japan to Europe. Bluegrass music was growing in popularity in Europe and we really believed that a good market could be established for our hot Kentucky Mandolin and Gold Star Banjos. In order to jump-start the effort, I invited my old pal Silvio Ferretti to bring his band, Red Wine, up from Genoa Italy. Red Wine was a first-rate European band with Silvio on the banjo, Martino Coppo on mandolin and Beppe Gambetta playing lead guitar. On the first day of the show, as I walked the floor, I came across a really remarkable booth. The décor was Spartan to say the least and the staff members were all dressed in drab gray Mao-style suits. It was the first international display of musical instruments from The People’s Republic of China! 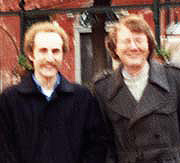 I wandered into the booth and looked over a few violins that were being offered. No one jumped over to help me so I just kept on pawing through the stock. Finally I approached one of the staff members, who was doing his best to avoid eye contact, and asked a question. I did not get an answer but was referred to another member of the team who could speak a bit of English. Since I was a small boy it had been a dream to go to China, but as I grew up the political situation in China was so bizarre that it did not seem that it would happen in this lifetime. So my first question was, “If I order violins can I visit the factory in China?” I was told that his office could send me an invitation letter and that he was quite certain that such a visit would be possible. “Okay,” I said, “I’ll take 200 of those!” I pointed at the best violin of the bunch, a simple carved instrument with inlaid purfling, which came with a case and a bow. He wrote me up and I signed a contract on the spot.

That night I was having a beer in the lobby of the Frankfurter Hof Hotel with Silvio and I told him, “Guess what? I ordered 200 violins from China.” “You’re nuts!” he replied. “I know,” I said, “but now I need a brand name.” Reminding me of his shared Italian heritage with Stradivarius, Silvio said that there was only one possibility – CREMONA, the birthplace of the master himself! So that was it! Next month I’ll tell you about that first factory visit in China.