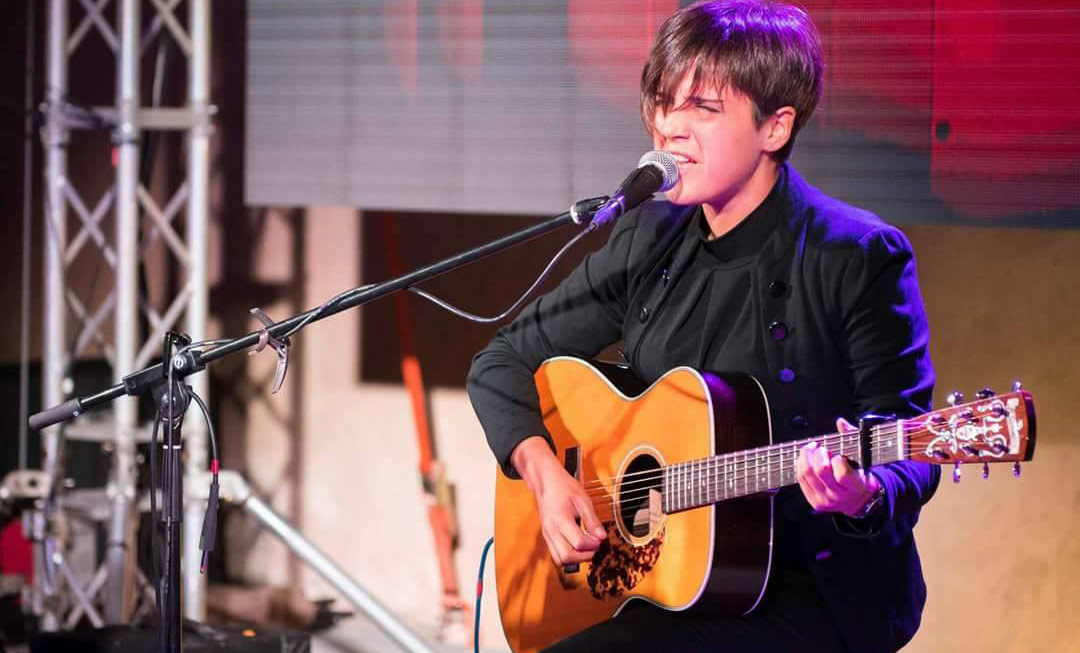 Irene Loche, born on June 26, 1992, is a Sardinian guitarist and songwriter. Since childhood she has been immersed in music, growing up listening to Soul, Blues, R&B, Rock and American Folk records. She has been interested in guitar since the age of 6 and learned to play self-taught.

She soon began experimenting and composing with the instrument and open tunings, mixing the chords and sounds that most influenced her.

She takes the stage for the first time at a very young age – at just 17 she formed her first Blues Band , recorded her first CD and performed her first tour in Tuscany. She later formed the Power Blues trio “Sunsweet Blues Revenge”, participated in important festivals such as: Pistoia Blues Festival, Ameno Blues Festival, Italian Blues River, Samedan “Out of the Blue’s”, “Mamma Blues” Dromos Festival, “Rocce Rosse” Blues Festival and many others. Irene and her band won several awards, and collaborated and shared the stage with national and international artists such as: Sherman Robertson, Ian Siegal, Fabio Treves, Guitar Ray & The Gamblers, Paolo Bonfanti, Francesco Piu, Nick Becattini etc.

Two more records were recorded, the first entitled “Better Luck Next Time” released in 2012 and the second entitled “A Box of Things” released in 2016, produced in collaboration with the “Talk About Records” label.

Several articles, interviews and reviews issued by various local and national newspapers are published about her and the band including: THE SARDINIAN UNION, THE NEW SARDINIA. The Unit etc.

In 2013 She participated in the “NAMM SHOW” music fair in Anaheim, Los Angeles (USA) as a guest and met several artists and musical representatives. On this occasion, she discovered the amplifiers of the American company “Magnatone USA”, meeting the CEO Ted Kornblum who remains enthusiastic about his sound and asks her for a consolidated collaboration. In 2015 she was officially appointed and recognized as the company’s representative and endorser. She will be the first female artist to be part of it and the first Italian representative together with names such as: Keith Richards, Jackson Browne, Jeff Beck, Billy Gibbons, Tom Petty, Neil Young and many others.

In 2016 she recorded her first solo album entitled “GARDEN OF LOTUS” and received excellent acclaim from the public and the press. She also participated in the WebTV program “Balcony TV” and in various festivals including “Sound Around The Island”, “Dromos Festival”, “Faber Festival”, “Vulcani Blues”, “Rocce Rosse Festival” and many others wins the selection at “BANDS AT NAMM 2017 “which will allow her to play at the” WINTER NAMM SHOW “in Los Angeles. Also in 2017, she performsed her first tour in England and opened up for Blues guitarist Dan Nash at “The Ritzy, Brixton (UK), together with the Sardinian harmonica player Marco Farris, with whom he begins a new collaboration.

In England she will play on many other important stages such as: “Ain’t Nothing But” London (UK), “The Bedford” Balham (UK) and on the occasion of the Blues Dancer Festival “BROWNE ALE BLUES” Newcaste, UK “.

In 2017, during a new edition of the NAMM SHOW, he met Bill Asher, luthier and CEO of Asher Guitar’s and Lap Steels, recognized by many artists as one of the greatest luthiers in the world. On that occasion she had the opportunity to try out several of his models and received a great consensus from him, which was very impressed by Irene’s guitar playing.

That same year, she played as a guest of several notable artists such as Eric McFadden at the famous club, “THE MINT” in Los Angeles (USA), and at “The Harvelle’s” in Santa Monica (USA) where she also met CC Thomas, bass player and musical director for Diana Ross who invites her on stage for a performance. She also met the legendary American artist Jackson Browne, who was impressed by her and with whom a beautiful friendship was born.

In 2018 she officially became the representative and endorser of the “Asher Guitar’s and Lap Steels” together with the likes of: Ben Harper, Jackson Browne, Fletwood Mac, Paul Simon and many others and she built her “T Deluxe 1111” model. Irene is also proud to announce that in 2018 she also became and endorser of the “Blueridge Guitars” from of SAGA MUSICAL INSTRUMENTS.

Irene continues to participate in numerous festivals including “Marina Cafè Noir”, “Mamma Blues” and “ICHNOS” where she meets the famous conductor and music critic Red Ronnie who invites her to participate in her “Barone Rosso” program where she debuts for the first time on TV. She is currently working on the new album to be produced in collaboration with “The Chicken Coop Studio.”