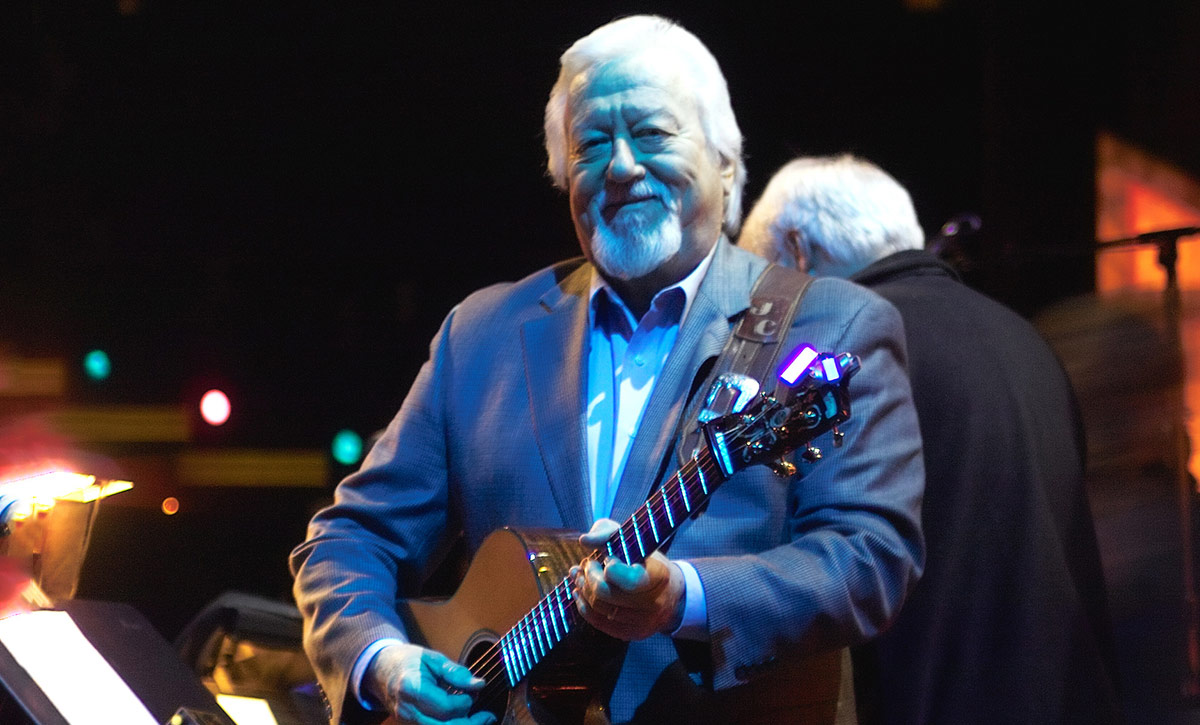 Over the years, countless guitarists have come to Nashville with as little as $5.00 in their pockets and their guitars slung over their backs in hopes of getting a job and making their dream a reality. Only a chosen few ever made it; especially those whose “fingerprints” are left on #1 hit recordings. Guitar great Jimmy Capps is one of those chosen few.

As one of Country Music’s finest guitar players, Jimmy Capps is a “master of smoothness”‘. He is known in the studio for his ability to move flawlessly from ‘electric to acoustic’ with a polished and refined touch that he brings to every recording or performance he is part of.

When you hear the richness and grace of his acoustic intros on “The Gambler” (Kenny Rogers) …”How Blue” (Reba McEntire) … “Near You” (George Jones and Tammy Wynette) …”After All These Years (Barbara Mandrell) …16th Avenue (Lacy J. Dalton) … and on Conway Twitty’s “I Don’t Know A Thing About Love”… it comes as no surprise that this gifted guitarist can easily alternate into his more distinctive, electrifying sounds that you hear on the intros of Waylon’s “Brown-Eyed Handsome Man”…Terri Gibbs’ “Somebody’s Knockin’ “… Charley Pride’s “Honky Tonk Blues” … or The Louvin Brothers’ “How’s The World Treating You” and “Second Time Around” … just to name a few.

Some other incredible recordings you can hear Jimmy on are George Strait’s “Amarillo By Morning” and “Unwound” … Alan Jackson’s “Here In The Real World” … The Oak Ridge Boys’ “Elvira” and “Sail Away” … Barbara Mandrell’s “Sleeping Single In A Double Bed” and “I Was Country When Country Wasn’t Cool” … Conway’s “Lost In The Feeling”, “Red Neckin’ Love Makin’ Night”, and “Don’t Call Him A Cowboy” … John Denver’s “Some Days Are Diamonds” … as well as such artists as Andy Williams … Ray Charles … Mac Davis … John Conlee … Moe Bandy … Joe Stampley … Billie Joe Spears … Johnny Paycheck … Janie Fricke … and all of Ronnie Milsap’s recordings through 1988, to include such hits as “Smoky Mtn Rain” and “Legend In My Time”.

At one time, Jimmy averaged 520 recording sessions a year, yet he still took time to go to Belmont College to learn his craft even more, studying ‘time evaluation’ under John Pell. But how did it all start with Jimmy Capps?

Born in Fayetteville, North Carolina to Alice and Tommy Capps, and raised in Benson, NC, Jimmy listened to the Grand Ole Opry since he was 8 years old. He was inspired by his champion fiddle-playing uncle, Lynn Cook, and local guitarist Hayden Ivey. Jimmy was asked recently, “How old were you when you started playing guitar?” He said, “12”–then, “How old were you when you started playing and performing on local radio shows?”– his reply was, “12”!
He sang and played on WCKB-Dunn NC, and in 1956 Jimmy worked in both radio and TV in Florence, S.C. with a performer named Slim Mims. He moved on to Wilson to work with another “Slim” (Slim Short), and he played local clubs in Benson in a band called The Tar Heels.

But one audition in 1958 changed Jimmy’s life forever when he became the guitar player for one of country music’s all-time greatest duo-teams … The Louvin Brothers. The story goes like this….

“When I auditioned for my job with the Louvin Brothers, their current guitar player (Paul Yandell, who had been drafted into the Army)) had heard me working with a duet in North Carolina who sang all the Louvin Brother’s songs, so I knew all the intros and turnarounds to their songs. He’d heard me play and recommended me to the Louvins”.

“So I went to Burlington, N.C. and after their show, we went back to the hotel and I auditioned. I did all their intros and turnarounds to the songs they auditioned me with and they seemed to like me okay. But their guitar player noticed I didn’t use a thumbpick…he then asked me if I could play “Malaguena”? I told him, “No I couldn’t”.
Charlie Louvin spoke up and said, “Well … Ira and I very seldom sing “Malaguena” anymore … so, we’re gonna hire you anyway!

“Thanks to Charlie … I guess I owe my whole career to him. That one split-second decision that he made is the reason I am here. That decision made all the difference in my life.”

Jimmy recalls when the Louvins were scheduled for a guest appearance on the Grand Ole Opry, he came down with double pneumonia. He said, “No way am I going to miss playing the Opry … if I die on the stage … I’m gonna work the Opry … just one time!” And he did! He remembers playing “The Knoxville Girl”, but he was so scared Pete Wade had to help him plug his guitar into the amplifier. Jimmy said that’s one of his most cherished moments. That was the latter part of 1958 … of course his ‘just one time’ has turned into years of history on that hallowed stage.

Jimmy Capps has now been a member of the Grand Ole Opry Staff Band since 1967 (although it wasn’t officially graced with that title at that point in time).

All of the Grand Ole Opry Staff Band was honored on October 11, 1982 when the CMA nominated them for “Instrumental Group Of The Year”

He said, “Seriously, I would get up early before I went to school, and my Dad and I would listen to Spider play guitar with Big Jeff. I didn’t realize there wasn’t that much difference in our ages. Spider was going to school too, just like me. But he is one of my heroes. I’ve always admired him … it’s really wonderful to get to work with your heroes like that.”

I asked Jimmy what he considered his ‘finest moments’ in the studio, to be. He quickly answered, “My years with producers Owen Bradley, Billy Sherrill, and Larry Butler. When you left the studio after working with them, you knew you had contributed to a ‘puzzle’ these Masters would put together, and you were a piece of that puzzle.”

Jimmy has learned from the Master Producers the art of song production. He has produced albums on artists such as The Wilburn Brothers, Jan Howard, Jim & Jesse, Roy Drusky, David Houston, and Stu Phillips, to name a few.

Throughout his career, Jimmy Capps has received numerous awards from the “National Academy Of Recording Arts & Science”. These are awards for playing on the ‘Most #1 Hit Recordings’ … thus making him a member of the “NARAS Superpickers Band” for the years 1978 & 1979. In 1979 he was also voted ‘Most Valuable Acoustic Player’.

In 2014, Jimmy was inducted into both the Musicians Hall of Fame and North Carolina’s Music Hall of Fame. He was also featured on the August 2019 cover of International Musician magazine highlighting his 61 years on stage. In May, 2019, Jimmy was honored with a memorial marker on the sidewalk in front of his boyhood home at 216 W. Church St., Benson, NC and the street is known locally as Jimmy Capps Parkway.